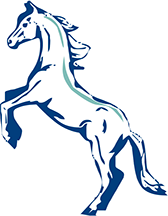 What is TENS and EMS?

stimulation. The great advantages of both therapies are a reduction of pain, a build-up of muscle as

well as improved coordination.
They were originally used in the field of pain therapy. The TENS therapy is based on small, nearly

unnoticeable stimulations that influence the nervous system. They interrupt pain signals and thereby

provide relief. With horses, a deviating type has proven to be very successful.
A nerve receives impulses via a low frequency but a stronger current to contract and relax the

corresponding muscle. A rhythmic pulsing can be observed. Due to the release of endorphins, an

increased state of relaxation begins. The EMS therapy leads to a continuous contraction of the muscle

as a result of increasingly shorter frequency intervals.
The muscular system is then put in a higher state of activity with short intervals of contraction and

relaxation. Using this type of therapy supports the rebuilding process of missing muscles.

Additionally, the muscle “relearns” to contract and relax completely.

What does massage mean?

The massage (from Arabic for “to touch,” the French word masser (“to massage”) or the Greek word

for “chewing” or “kneading”) serves to mechanically influence the skin, connective tissue and muscles.

The skin, which is the largest “organ”, is very sensitive and has many interconnected nerval receptors.

The skin is also needed for temperature regulation (sweat), for detoxication and cutaneous respiration

that corresponds to 0.5–0.8 % of breathing through the lungs. The effect of the massage extends not just

to the treated area but rather throughout the entire organism and even the mind.

Sports massage is an addition to the classic massage. The surface is first calm down and relaxed with extensive, soft techniques, which also serve to build trust. This allows advancing to the deeper layers

and, with stronger, selective techniques to release, the actual hardened area and tissue adhesions.

Each athletic event entails specific problems and needs are adapted on an individual basis.

Acupressure is derived from acupuncture and uses the pressure of fingers to stimulate certain points. Acupuncture (Lat.: acus = needle, punctio = stinging) is a segment of traditional Chinese medicine (TCM).

It is based on life energies of the body (Qi), which circulate on specific Bodylines, called meridians, and

have a controlling influence on all functions of the body. An interrupted energy flow is held responsible

for blockages and illnesses. By “stinging” the acupuncture points on the meridians, the energies are

What are trigger points?

Trigger points are defined as oversensitive and pain-triggering points in the body. Many of these trigger

respective muscle and prevent it from stretching. However, they also “trigger” the pain in areas further

away and disrupt autonomous course of movement. Shortening muscles impair the movement of

adjacent joints and can lead to joint trauma.
Dr. Janet G. Travell (1901–1997) was the first (and most significant) woman who discovered the trigger

points and, among other things, used them to develop the “Myofascial Release” method.

What are stress points?

Similar to trigger points, stress points can be found everywhere in the muscular system of a body.

They are often located where a muscle originates and cause the muscle to tie up, which also shortens it. When pressing one of the stress points, the muscle experience “stress” and often becomes spastic or

vibrates. Jack Meagher developed the stress point massage back in the early 1970s and, in his book

“Beating Muscle Injuries”, he gets to the point of it: “If a muscle is not working for us it is working

(“applied kinesiology” from the ancient Greek “kinesis”, which means “movement” and “iologie”,

which means “word, teaching”) and is not to be confused with the “kinesiology” for the science of

movement. The main concepts of kinesiology are based on the assumption that blockages, functional limitations and health defects manifest themselves as weakness in certain groups of muscles.

Kinesiology uses a muscle test as part of its diagnostic method. It is supposed to detect imbalances and dysfunctions of substances, information, emotions and therapies. The muscle test therefore serves as

a “Biofeedback system”. For example, dysfunctions are the result of emotions that cause stress.

Hormones are being released and feelings of paralysis set in, limbs are being confused, etc.

These dysfunctions are counterbalanced by an adjustment and continuatives techniques.

meridians. Bodily blockages, energies that are too low or too high are treated with the help of

What is the craniosacral system?

The head (cranium) and the sacrum play a key role in this system. Its basis are the cranial sutures that

are flexibly connected to each other by membranes. The flexibility is created by the flow of the liquor,

the cerebrospinal fluid. It is an independent regulatory system that is responsible for balance and a

healthy functioning of the body. This system has its very own rhythm in the same way that the

respiratory rhythm and the heart rhythm do. They are all systems that, while “independent”,

One of the most effective types of stretching. The muscle group(s) are now in a relaxed and pain-free

state as a result of the preceding, preparatory techniques. A high degree of elasticity of the muscular

system is achieved. An integration of the respiratory rhythm enhances the effect.

The advantages, in addition to the extension of the outer muscles, especially include an increase

in coordination.
It demands synchronisation as well as the function of letting muscles act both as player